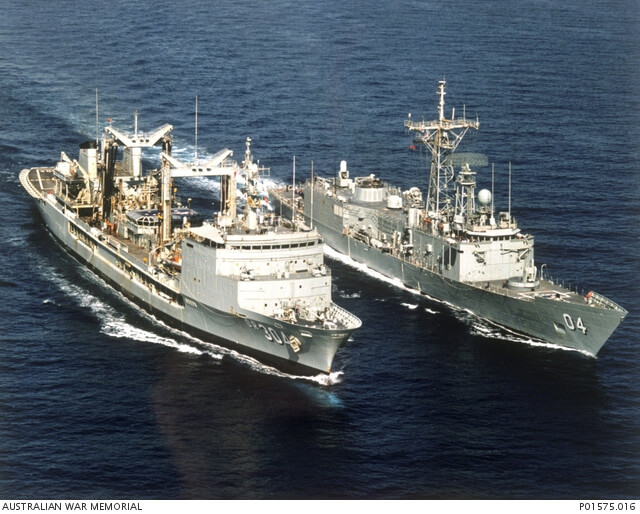 In November 1990 the UN Security Council set 15 January 1991 as the deadline for an Iraqi withdrawal from Kuwait. On 17 January an aerial bombardment of Iraq commenced and continued without respite until the war ended 43 days later.

On 24 February 1991, the coalition’s ground forces moved against Iraqi positions in Kuwait and in Iraq itself. The magnitude and decisiveness of these strikes destroyed what was left of Iraq’s capacity to resist.

After two days Baghdad radio announced that Iraq’s armed forces had been ordered to withdraw from Kuwait. Two days after this order, the coalition ceased hostilities and declared victory. Coalition losses amounted to 166, many by “friendly fire”. At least 100,000 Iraqis had been killed.

Australian forces were deployed in the Gulf War under the auspices of the UN. The Royal Australian Navy (RAN) provided vessels for the multi-national naval force, acting as interceptors in the Persian Gulf to enforce the UN sanctions. A RAN clearance diving team was also dispatched for explosive ordnance and demolition tasks. In addition to naval units, Australian personnel were attached to British and American ground formations.

A small group of RAAF photo-interpreters was based in Saudi Arabia, together with a detachment from the Defence Intelligence Organisation. Four Australian medical teams worked with US forces. Although the ships and crew were in danger from mines and possible air attack, Australia’s war was relatively uneventful, and there were no casualties.

At the war’s end, 75 Australian personnel were sent to northern Iraq to assist the delivery of humanitarian aid to Kurds living in the UN-declared exclusion zone, while ships of the RAN remained on station, at US request, to maintain trade sanctions.