The veranda of the 1845 Enrolled Pensioner Barracks at Kojonup is a pleasant place to spend a summer’s afternoon in the Western Australian wheatbelt. In 1989, on a visit to the local museum that now occupies the barracks, I sat with local farmer and historical society member, Robert Sexton, as we contemplated the medal awarded to Corporal John Robinson. The barracks had been Robinson’s home and post 130 years earlier. The medal was embossed with the word “CABUL 1842”.  Robinson, a Dubliner, had fought in Afghanistan with the 9th Regiment of Foot through the late Summer of 1842. 10 years later, and after 21 years in the British Army, he came to Western Australia as a convict guard and was sent to the tiny outpost at Kojonup. As Sexton and I contemplated Robinson’s medal we wondered at the stories that Robinson and his comrades, fellow veterans of the First Anglo-Afghan War (1839–1842), would have shared on that veranda. Sexton included anecdotes from his own time in the Australian Army. He had been conscripted from the farm into the Royal Australian Regiment and seen some of the most intense fighting experienced by Australians in the Vietnam War. Sexton had survived Operation Cockburg, during Tet ’68, and the defence of Fire-base Coral. Typically, his stories were about some of the lighter moments. We wondered what Corporal Robinson would have made of the fate of Russians fighting in Afghanistan at that time.

In over three decades since that conversation I have reflected much about the power of objects to tell stories, to freeze a moment in time, and invite us to think about the experience of those who have seen the face of battle and returned to families and loved ones. Men and women who have lived long and full lives but revisit memories of trauma and war. With Afghanistan in the news on an hourly basis how do we, at the Anzac Memorial, fit this war into our story?

From 1830 to 1836 the 17th Regiment of Foot, young men largely recruited from Leicestershire in Britain, served in New South Wales and a settlement on the Brisbane River that would eventually become the colony of Queensland. Initially tasked with guarding convicts and providing garrisons in little outposts in the interior, the regiment was frequently called on to send detachments to sites of conflict with the indigenous population. In June 1835 Major William Croker led the Light Company of the regiment to the Hunter River to enforce colonial authority over the Guringai/Guringay people after the spearing of two stockmen. We can only wonder if Croker and his men remembered sunny summers in NSW as they froze and marched and fought their way through to Ghuznee and Khelat-I Gilzee in Afghanistan four years later. 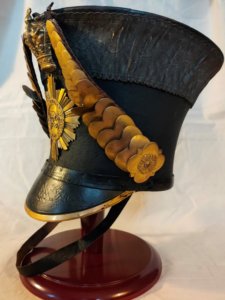 Bell top Shako c1840. These shakos were worn by British troops in the Australian colonies through the 1830s and in Afghanistan during the First Anglo-Afghan War 1839–1842. 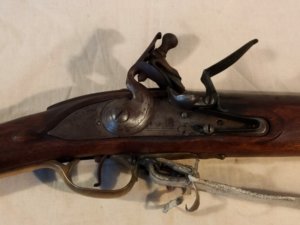 Lock of an India Pattern Musket, 1793-1842. These guns armed British troops in the Australian colonies in the first decades of European settlement and in Afghanistan during the First Anglo-Afghan War. The 44th used them at their last stand near Gandamak in 1842.

Fortunately for the former NSW residents of the 17th Regiment they did not suffer the fate of the 44th Regiment at Gandamak in January 1842. During the doomed winter retreat from Kabul the regiment fought a courageous rear-guard action in the hope of buying time for their mates and for the wives and children of the fleeing garrison to make it back to northern India. Despite the last stand of the 44th at Gandamak the entire column was wiped out, the garrison’s doctor, wounded and exhausted, the only British survivor to make it to Jalalabad. Nine members of the 44th, Captain James Souter, Sergeant Fair and seven other ranks, were wounded, captured and tortured after Gandamak. 170 years later the British Army named one of its bases in Helmand Province, Camp Souter.

150 km south-west of Gandamak, as the crow flies, is the village of Maiwand. On 27 July 1880, in a dusty valley, scored by erosion gullies, near the village, a British Army found itself outnumbered ten to one by Afghan soldiers and Pashtun warriors, foot, horse and guns. Despite a gallant fighting withdrawal, the British force broke up and the infantry was annihilated piecemeal. Among the last to die were eleven officers and men of the 66th Regiment of Foot led by, Sydney born, 20-year-old Lieutenant Walter Rice Olivey. The regiment fought its way back to a garden, what Afghanistan veterans of the Australian Defence Force would now call a compound. When the cartridges ran out it is said that the young man from Sydney, wounded but with sword drawn and holding the Queen’s colour, led his men in a bayonet charge. 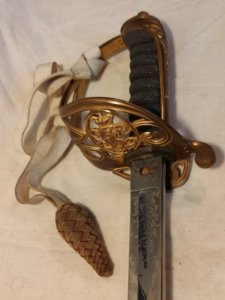 There is no memorial to Lt Olivey in his NSW birthplace, and neglect, in concert with the harsh Afghan climate, has long obliterated the battlefield where he and his regiment died, but his name is recorded on the plinth beneath the lion at Forbury Gardens, Reading UK, a monument to the men of the Berkshire Regiment who fell in the Second Anglo-Afghan War (1878-1880). 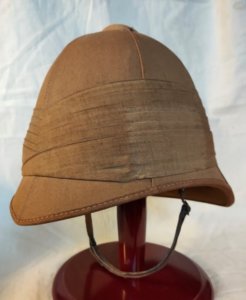 British Foreign Service Helmet c1880. Khaki cloth covered helmets, made of cork pith, were worn by Lt Walter Olivey and the men of the 66th at the Battle of Maiwand. 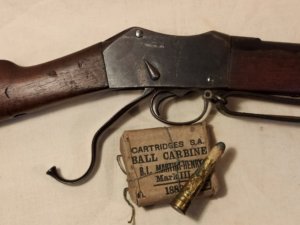 Action and bullets of a Martini Henry rifle of the type used by the soldiers of the 66th at Maiwand, until the cartridges ran out.

As we searched for photographs to complete the book, In That Rich Earth, that we hope explains the soil collected from 100 battlefields and set into the floor of the Hall of Service at the Anzac Memorial, guide and Afghanistan war veteran David Land shared the images he had taken from his position as a door gunner in a Chinook helicopter of C Company, 5th Aviation Regiment. The image that immediately grabbed my attention was that of the fortress of Qalāt. Despite the telecommunications towers erected by US technicians above the ancient fortress, that crowns the ridge at Qalāt-e Ġilzay, little has changed since the men of the 17th Regiment from NSW fought in its shadow in the Spring of 1842. 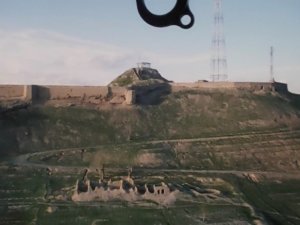 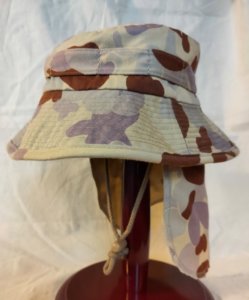 David is not the only veteran of the war in Afghanistan to join the staff at the Anzac Memorial. Among the others Milan ‘Hooch’ Nettleton was the last to serve a tour. Hooch deployed as an ANAOA (Afghan National Army, Officer Academy) Mentor in 2017-18. He notes that “the Afghan Kandak (Battalion) we mentored had a company named Maiwand. Our mentees enjoyed making this a point to British Mentors.” They followed in the footsteps of fighting men in Afghanistan that predate the conquest of Alexander.

Perhaps we should conclude these musings where we began. Visitors to Kojonup up in 100 years’ time will still be able to see Cpl Robinson’s silver medal, awarded for his role in the capture of Kabul in 1842. The collection at the Australian War Memorial in Canberra will continue to preserve and present the muskets, swords and uniforms of Queen Victoria’s wars in Afghanistan. The transient materials of the 21st century however, the Kevlar, nylon and plastic Velcro, of the latest war, will deteriorate in a few decades and the Instagram generation has yet to produce a Rudyard Kipling. How will we remember the faces and the names of the men and women who fought this war?

Brad Manera is Senior Historian of the Anzac Memorial