80 years since the Bombing of Darwin

On the 19th of February each year, we commemorate the Anniversary of the Bombing of Darwin.

In 2011, Bombing of Darwin Day joined Anzac Day and Remembrance Day as a National Day of Observance.

It is 80 years ago that Australia faced this unprecedented foreign attack on home soil.

Darwin had been a strategic port on Australia’s northern edge for decades, but in the mid- 1930s a major military build-up began. By 1942, the population had more than tripled, with around 7,500 troops stationed in Darwin and many military installations dotted throughout the Northern Territory.

There were, however, around 2,300 civilians still in Darwin on 19 February 1942. Seventy of them were women who claimed essential jobs such as secretaries, nurses, court stenographers, maids and telephonists.

Just before 10am that day, formations of 188 Japanese aircraft mounted a deadly air raid on Darwin. There were two attacks, the first lasted about 25 minutes with Kate bombers, Val dive bombers and Zero fighters causing devastation in Darwin Harbour, to infrastructure and to the town. The second, at 11:45am, involved high altitude bombing of the Royal Australian Air Force base by twin-engine machines. The attacks were planned and led by the same Japanese commander who also led the attacks on Pearl Harbour 10 weeks earlier, Commander Mitsuo Fuchida.

Bombs rained down on Darwin city and Darwin Harbour was dotted with 46 allied ships which became targets for the enemy aircraft and soon black smoke rose from damaged ships. Burning fuel on the surface of the Harbour’s water created a deadly hazard for survivors trying to escape the carnage.

The Neptuna, an ammunition ship, was tied up at the Wharf, and nearby the destroyer USS Peary was anchored, having arrived back at Darwin Harbour that morning for supplies. A direct hit to the wharf killed at least 21 wharfies, and both the Neptuna and Peary were bombed multiple times and sunk to the seafloor. Around 24 men on board the Neptuna and up to 92 men on the USS Peary lost their lives that day.

Sadly, by nightfall on the 19 February 1942, at least 235 people were killed, more than 400 were wounded, 30 aircraft were destroyed, 9 ships were sunk, and many civilian and military facilities were destroyed or damaged.

Army nurses and enlisted women served in military hospitals and camps throughout the Territory, including nurses based in Darwin from mid-1941. They tended many wounded on 19 February 1942, some working continuously for up to 48 hours, and were described as heroines – alongside all the women in Darwin that day.

The air attacks across northern Australia, centering on the Territory, continued until November 1943, by which time the Japanese had raided Darwin at least 64 times and the Top End over 200 times. None of the subsequent raids matched the ferocity, damage and deaths as did the air raids on that first fateful day, 80 years ago.

The Bombing of Darwin Commemorative Service at The Esplanade in Darwin will be livestreamed from 11am (AEDT) on Saturday 19 February 2022. 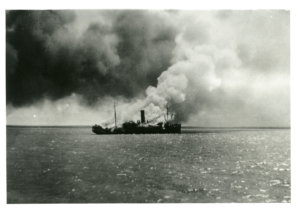 The ‘Zealandia’ after the Bombing of Darwin, 1942. 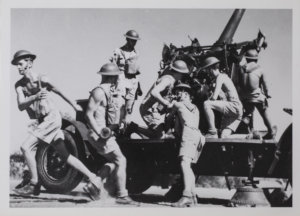 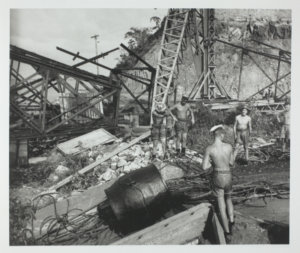 Riggers at the Royal Australian Navy Boom Defence Yard, preparing to launch a section of the anti-submarine netting down a chute alongside the Boom Wharf. 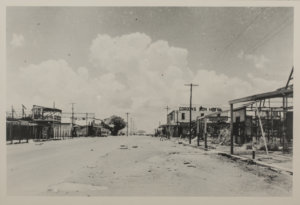 Damage to Darwin was widespread. The photograph shows Cavenagh St, with a view across Bennett Street intersection toward the Esplanade. It shows Gordon’s Don Hotel and Chinatown.