Inside the National Centre for Veterans’ Healthcare 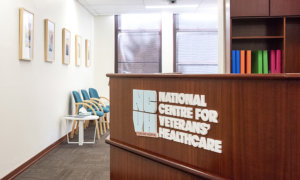 “I’d heard there was a veterans’ health service being established in Sydney, but I wasn’t aware of the National Centre for Veterans’ Healthcare (NCVH) until I met the RSL NSW Liaison Officer,” says CEO of Disaster Relief Australia Geoff Evans, a member of the Malabar sub-Branch.

Geoff had sustained spinal injuries in a bomb blast during his second deployment to Afghanistan in 2010, and been seeing pain specialists for a decade by the time he met Liaison Officer Bronte Pollard

“I’m extremely well versed in the veterans’ sector,” Geoff says. “Despite that, I still needed the RSL NSW Liaison Officer’s assistance. Bronte’s access and knowledge meant I was seeing leading specialists within a week of our first conversation.”

The care process at NCVH begins with a holistic assessment of physical and mental health, which Geoff hadn’t seen together previously.

“One of the most memorable parts of the experience was at the very beginning, just the fact that the centre is incredibly welcoming to veterans. It operates in a way that reduces your anxiety. It’s the first medical centre I’ve walked into and been offered a cup of coffee, for example.” 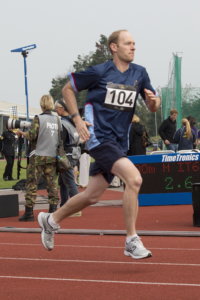 Geoff Evans during a 400m qualifying heat at the inaugural Invictus Games, London 2014.

After that initial assessment, a multidisciplinary team has a case conference about each individual. This is followed by appointments with other specialists at the NCVH, before the veteran is referred to specific, experienced providers in their local community who can respond to the veteran’s unique needs.

“Yes, I have my own pain specialists. But because of the multidisciplinary approach at the NCVH, looking at whole-of-person and whole-of-life, and seeing where everything interconnects and how they can assist, it was an exponential step forward in my own healthcare,” Geoff says.

Bronte, who served in the Royal Australian Navy during the 1980s, discharged in 1990 then married and moved overseas. He was disengaged from the military community after his transition out and during his time overseas, until he saw a need to help.

“When we got back, I just felt like I wanted to help with what I saw was happening to veterans and members when they returned from deployment,” Bronte says.

They were not receiving the care he felt they deserved.

He joined RSL NSW in 2014 and has been re-connected to the veteran community since then.

Bronte’s role at the NCVH predominantly involves working with case managers to link veterans to services such as claims and advocacy support, social connectedness, financial assistance and more.

“My role typically is to use my connections and knowledge to help link veterans with non-clinical services,” Bronte says. “RSL LifeCare is a very big resource for me. I meet with the veteran to determine what they’re looking for and then refer them to a service that’s going to best suit their needs.”

Assistance filling out online forms or taking the veteran to the supermarket can be enormously helpful, Bronte says.

“Often the simplest things are the most powerful,” he says. “A rural veteran staying at our onsite accommodation, Fussell House, may be a little overwhelmed. They’re away from what they know. So I’ll take them down to Woolies and just chit-chat with them, break the ice. It’s just a little thing, but it helps them get settled. That’s hugely important, particularly as they’re potentially a little bit anxious. It’s a circuit-breaker.”

All ex-serving members of the Australian Defence Force with at least one day of continuous, full-time service are eligible for referral to the NCVH. There is no cost associated with receiving treatment and services there.

“The centre’s service covers four main medical streams – rehabilitation medicine, drug and alcohol, pain management and psychiatry – and that’s all case managed. Then there’s the Allied Health Services. Specialists at the NCVH have the ability to refer to the hospital, too,” Bronte says.

“One of the huge benefits for veterans with complex medical needs is they can go to one site and, potentially on the same day, see a number of specialists and have various tests done. They’re not having to run all over the place for weeks on end.”

While the NCVH doesn’t offer long-term care, it ensures veterans experience a holistic assessment and class-leading treatment and advice, followed by a care plan and referrals to experienced local practitioners.

“The medical and other professionals at the centre are exceptional,” Geoff says. “We’re really lucky to have them.”

Find out more about the NCVH and onsite accommodation at Fussell House, and access assistance: