Military families are a major support pillar of defence careers – often holding down the fort during deployments or postings, if not moving around the country with each posting. We spoke with a Navy wife and an Army son about the joys and challenges of a life less ordinary, the impact of service and the importance of veteran support.

A few weeks after we speak for this story, Amanda Curby’s submariner husband Shayne is being posted interstate for 12 months. Many challenges and sacrifices will appear in Amanda’s life during his absence, not least of which is simply missing him.

“The submarine field is quite secretive,” says Amanda, who volunteers as Secretary of the RSL NSW Young Veterans Committee alongside her role as a Defence Community Relationship Officer with Defence Health.

“As a partner, you don’t know much about what’s going on. You just have to trust that you’ll see them when you see them. While they’re gone there won’t be a lot of contact. That’s the nature of being a submariner’s wife or partner.”

There are a lot of deployments, too, leading to a great deal of time when Amanda is on her own with their two young children.

“The main challenge is that you can’t do anything about it when you miss someone,” she says. “You just have to miss them. That’s the hardest part.”

There are also the positives – Amanda counts among them experiencing different places when Shayne takes up new postings.

“Also, I’m extraordinarily proud that my husband serves his country,” she says. “ANZAC Day is a big event for us. There’s a real sense of immense pride and patriotism that goes with it.”

Her job with Defence Health links Amanda to support mechanisms available to service people and veterans, and she spends time on bases among Defence and ex-Defence personnel.

Being able to access resources and services is vital for any family connected to the Defence community, she says – whether they are still serving or not, and events specifically for servicepeople, veterans and their families are a great source of a lot of information about support services.

Looking after the kids 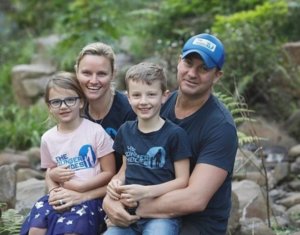 Damien Schofield, on the other hand, sees equal benefit in broadening the networks of veterans, rather than keeping them connected to the military family. He prefers ‘mixed-bag events’ that might include people from related fields – doctors and nurses, police officers, paramedics. This way, he says, veterans begin to see pathways down which their own experience and skills might take them.

“I find the veterans that broaden their communities really excel, where those that remain in their Defence community can have a tougher time,” says Damien, whose father served during the Vietnam War as a machine gunner in the Royal Australian Regiment’s 7th Battalion.

Born after that war, Damien describes his dad as a “beautiful man” who suffered PTSD as a veteran.

“Being a young boy and growing up on a family farm, watching your father go from a strong man to someone who had to be hospitalised for months on end was pretty confronting,” he says.

“Later in life, I was working in drug and alcohol rehabilitation and I saw a lot of issues that people had in their adult life that stem from their childhood. Then I lost a few mates to suicide.”

On his way home from a friend’s funeral, during a seven-hour ride on a Harley Davidson, Damien considered what might be done about the problem of children scarred by their childhood experiences. He realised that if you could access the child and their parents, encouraging them to speak up about what they’re feeling might be powerful.

From this idea he launched The Younger Heroes, a family relationship-focused program (for which he is currently seeking sponsorship to ensure another year of service). It helps support parents and children affected by long periods of time away from each other due to their employment.

Damien’s father had simply been shipped home when he returned from active duty. There was very little support offered at the time, particularly in rural areas. Veterans were simply expected to get on with their lives. Many of those veterans and their families suffered for decades afterwards.

“These days I still hear similar stories over and over again,” Damien says, describing the transitions he’s heard of as “pretty old school”.

“Things are changing very slowly,” he says. “I think things are going to change, but it’s still a good five to 10 years off.”

Be part of the change – join RSL NSW. Membership of the state’s leading not-for-profit ex-service organisation is free for all veterans and it’s easy to join online.