Remembrance Day commemorative events today marked the 103rd anniversary of the signing of the peace agreement that ended World War I, at 11am on 11 November 1918.

Several events today honoured the memory of all those who have served in wars and conflicts.

As the sun rose over Sydney and poppies were projected onto the Opera House sails, RSL NSW President Ray James joined the NSW Minister for Veterans Natalie Ward for a special dawn service, with RSL Australia ambassador and veteran Peter Rudland.

An ADF bugler played the Last Post and the Reveille, marking the beginning of a day of commemoration. 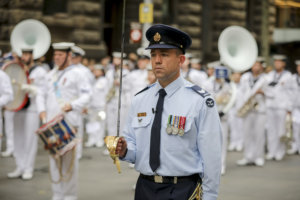 RSL NSW members and veterans attended the remembrance Day service at the Cenotaph in Martin Place.

“We can all take pride in our original ANZACs,” said Uncle Harry Allie MEB in his Acknowledgement of Country, reflecting on the dignity with which Indigenous soldiers have served. “Today, on this land, may we remember them.”

“Last year, we commemorated the 75th anniversary of WWII,” said Wing Commander Peter Overton AM, the event’s Master of Ceremonies, acknowledging veterans of that conflict present at the ceremony. “I’d also like to acknowledge veterans of Afghanistan and Iraq who are here with us today.” 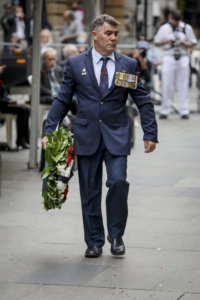 RSL Australia Ambassador Peter Rudland prepares to lay a wreath at the Cenotaph.

This year, RSL NSW members from WWII, Vietnam, Iraq and Afghanistan were seated together, and we were proud to see them, wearing the RSL badge, as Ray James and Peter Rudland lay wreaths on behalf of veterans.

Reflecting on Australia’s recent participation in conflicts in the Middle East, Air Vice-Marshal Vincent Iervasi urged attendees to use the occasion to honour those recent veterans’ experiences.

“We remember the 41 soldiers and their families who paid the ultimate sacrifice,” said Iervasi.

All Australians were encouraged to stop and remember at 11am, with the campaign appearing on all Outdoor Media Association billboards and throughout several terminals at Sydney Airport. 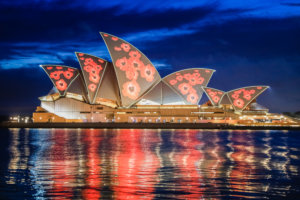 Gracing the Sydney Opera House sails once again in the evening, our iconic poppies are unmissable and unmistakable.

Three recent announcements by the Federal Government come as good news for veterans with health and...
Latest News

To commemorate the 80th anniversary of the Kokoda Campaign, personnel from the 39th Operational...
Latest News

How sport gave Peter Rudland a new lease on life

After a helicopter crash left him with extensive injuries, Peter Rudland wondered if he could still...
Australian Army Physical injury Sports Treatment and recovery
Latest News

How RSL NSW is addressing the Royal Commission recommendations

How RSL NSW and its partner organisations are addressing the recommendations in the Royal Commission...
Mental health Royal Commission into Defence and Veteran Suicide RSL LifeCare Support services