By Steve Meacham and Hallie Donkin

As Luke, 38, barks his orders, his 40-strong platoon leaps into action despite the perpetual downpour. These volunteers clearly love getting down and dirty.

“In their home environment, dogs learn [that] if it’s raining, they won’t go outside very far,” says Luke, who co-founded Doggy Daycare Farm Trips with wife Sam in 2015.

At the farm, though, they do as they’re told – even if that involves mud.

“Many of the dogs that come each week are working breeds living in the city, needing the exercise our farm can give. But we have plenty of ‘oodles’ [poodles mixed with other breeds] and companion breeds that aren’t typical farm dogs just looking forward to a day of fun away from the apartment.”

In a typical week, the farm hosts up to 200 willing recruits, arriving from Monday to Friday on a specially converted ‘dog bus’ from Sydney. Each pack of between 30 and 40 dogs comes on its allotted weekday, so the dogs are very familiar with their pack mates.

Surely, there are dog fights?

“We have strict rules and assessment, and zero tolerance for dogs breaking rules or dominant behaviour. Our farm is about dogs being dogs, having fun,” says Luke.

“If a dog doesn’t want to have fun, or seeks to assert its dominance, it fails immediately. With packs this big, the dogs need to realise that I, and my staff, run the show.”

Luke credits his military service (one active tour of Iraq, two of Afghanistan) with giving him the skills needed to build a unique and thriving business that he loves.

Brisbane-born Luke joined the Navy as an electronics technician in 2003, serving aboard HMAS Parramatta before transferring to clearance diver in Diving Team One five years later.

“But what I enjoyed most were the covert, mission-style operations.”

Offered a second promotion from Able Seaman if he stayed in Diving Team One, he volunteered instead for Tactical Assault Group – East, a special forces unit based at Holsworthy Barracks. Still part of the Navy, he was under the command of the 2nd Commando Regiment.

“We were sent in when hostage negotiations had failed, the last resort, and told that if 70% of the team came back alive, it would be a successful mission,” Luke explains. “It was high risk, high tempo and high reward. I’m proud of my service career.”

In time, he recognised another truth: “I’d attended too many funerals, and seen too many wives and children distraught.”

After he and Sam decided to marry, he left the Navy in 2014. To his surprise, returning to civilian life proved to be his biggest battle.

“Clearance diving and hostage rescues weren’t desired skills in civilian life,” he says. “Mates I’d served with overseas went through similar struggles. Some took their own lives. They’d got to peak, elite, well-respected positions – and came home to find they had no qualifications or respect.”

Luke is talking frankly about his black dog days to persuade other ex- servicemen and women to seek help.

“I asked for counselling,” he recalls. “My decade-long service entitled me to three sessions with a psychologist I had to find myself. That was my first introduction to the word ‘empathy’.”

Acknowledgement of PTSD in soldiers and veterans is better now than it was when Luke asked for counselling seven years ago.

Recent changes also mean that veterans are afforded mental health support for life, regardless of whether mental ill-health is caused by service. However, as the Australian Government’s Inquiry report A Better Way to Support Veterans notes, it has not met an urgent need for a veteran mental health strategy with a lifetime approach.

“Post-service, the age-adjusted rate of suicide for veterans is consistently higher than that of the Australian population,” according to the Australian Institute of Health and Welfare’s (AIHW) National Suicide Monitoring of Serving and Ex-Serving Australian Defence Force Personnel: 2020 Update.

The AIHW reports that between 2001 and 2018, 465 serving and ex-serving ADF personnel died by suicide. More than half, 267, were ex-serving personnel.

According to three-year rolling aggregates, which the AIHW uses to smooth out the peaks and troughs when dealing with relatively low numbers, the number of suicides is higher in the most recent reporting period – 123 in 2016–2018 – than when Luke transitioned out of the Navy seven years ago (the three periods that take in Luke’s year of transition range between 94 and 117 suicides).

“Ex-servicemen and women tend to deal with their internal struggles internally,” Luke says. The research backs this up, with the Veteran Mental Health and Wellbeing Strategy and National Action Plan 2020–2023 identifying cost and potential civilian career impact as possible reasons.

“I was lucky,” says Luke. “I had a very supportive partner. She gave me some skills to deal with what I was going through. Some of my mates haven’t been so fortunate.”

With Sam, Luke started Salty Dawg, a dog exercise business in the parks around North Sydney.

“I ran Salty Dawg like a military operation, always turning up on time, always challenging the dogs, never failing to exercise a dog if I’d promised to,” he says.

As the business grew, he quickly became frustrated with council by-laws in suburban Sydney. Sam – then pregnant with their first daughter, Elle – suggested they take a big leap, selling everything to launch the farm and Doggy Daycare Farm Trips.

Working with the dogs was helping Luke discover that emotions – which he’d seen treated in the military as a weakness or distraction – are the essence of the human experience. Luke had his second introduction to empathy, finding he could empathise much easier with dogs than he could with humans.

Today his joy is apparent in every video Sam records of Luke interacting with his four-legged clients. The couple has also employed an ex- serving member – they hope the first of many.

Though exhausting, the journey has been life-affirming – and one Luke wants to share now he and Sam are looking forward to future challenges and chapters of their lives.

“To me, losing a mate here at home was far more devastating than if they’d been killed in action overseas,” Luke explains. “If voicing what I went through helps my fellow veterans realise there is a way out, it would be ‘mission accomplished’.” 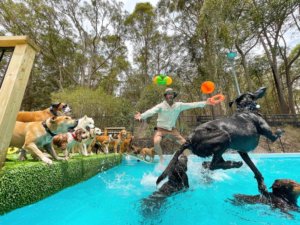 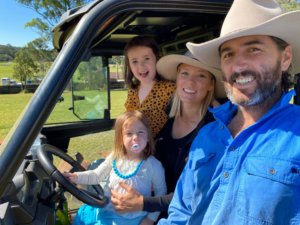 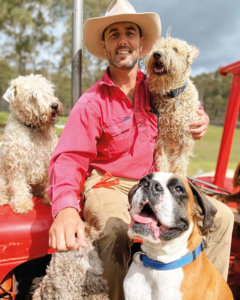 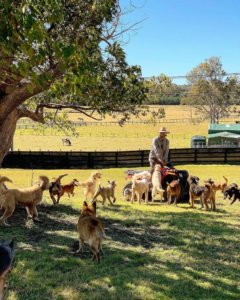 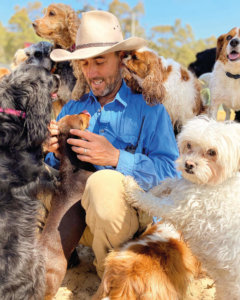 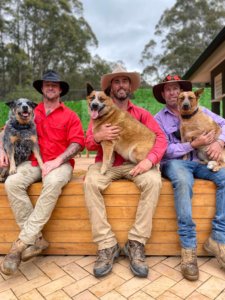 This article discussed post-traumatic stress disorder (PTSD), active service, transitioning out of defence and veteran suicides. If any of this raises issues for you, don’t go through it alone.