Under the hood: CA-16 Wirraway

Envisaged as a fighter, the locally produced CA-16 Wirraway would instead become a victim of circumstance. Temora Aviation Museum Chief Engineer Andrew Bishop on flying the Wirraway, as his grandfather did in the 40s and he does now.

It was an act of prescience: in 1935 the Chief General Manager of BHP, Essington Lewis, toured Europe and concluded that war would soon break out on the continent. In such an event, Australia would need a modernised aircraft industry.

The answer came in the form of the Commonwealth Aircraft Corporation (CAC), a consortium of some of Australia’s principal industrial companies.

“You would imagine that it was a government corporation, but it was actually a private company, which saw the storm clouds of war forming,” explains Andrew Bishop, Chief Engineer at the Temora Aviation Museum, which hosts one of the few working models of CAC’s first plane, the locally produced CA-16 Wirraway.

Envisaged as a fighter, the Wirraway would become a victim of circumstance.

“By the time it got into production, the rapid advances in aviation technology meant that it was pretty out of date as a fighter by 1939, when they were able to produce them,” says Bishop. “So in Australia, we used them as what we call an advanced trainer.”

But even if the Wirraway did not prove a decisive weapon of war, its role in preparing RAAF pilots and its status as a milestone in local manufacturing affirm its place in the history of Australian aviation.

“My grandfather was an instructor on these during the war. It feels weird when you’re cruising along, thinking, ‘My grandfather was doing this in 1944’.” – Andrew Bishop, Chief Engineer, Temora Aviation Museum 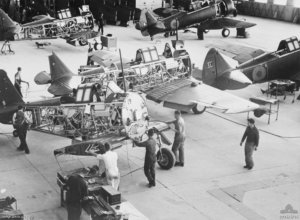 Workers at the CAC Factory at Fishermans Bend in Victoria move a Wirraway along the assembly line in 1940. Image: Australian War Memorial

“It was manufactured here,” says Bishop. “The engine is an American-designed Pratt & Whitney, but we bought the rights to them and manufactured them here. CAC also built the engines.”

Although the Wirraway was a locally manufactured version of the US-designed NA-16 aircraft, CAC introduced variations when it was built here.

The Wirraway was a vital step between basic training aircraft, such as the de Havilland Tiger Moth biplane, and the frontline planes of the day.

“The Wirraway isn’t a very friendly aeroplane,” says Bishop, who, as a pilot and engineer, can speak from experience. “Some people view that as a shortcoming. However, in its role as an advanced trainer, I’d suggest unfavourable characteristics actually made it a superior trainer.”

Pilots of the Wirraway were required to learn to fly in a disciplined manner – an experience that pilots of overseas equivalent models that improved on the design did not have.

“They developed that aeroplane a lot further and made it a lot easier to fly,” Bishop says. “If you imagine, it’s probably a bit like learning to drive in an automatic car versus a manual. [The manual] is a bit more mechanical. It’s a bit more clunky and you probably learn a bit more because of that.”

“About 10 or 12 years ago, we went through and had all the magnesium alloy castings re-manufactured in a more suitable, modern material,” Bishop says.

The maintenance crew also relies on 3D scans and computer numerical control machining to keep the aircraft in flying condition.

Like a monthly round up of RSL NSW member news and events, straight to your inbox? Subscribe to our monthly enewsletter.

A little help from man’s best friend – and support from his wife Sam – has given veteran Luke...
Doggy Daycare Farm Trips|Luke Evans|Mental Health|Reveille
Board Communique

More than 9,200 veterans marched in Sydney on ANZAC Day, with spectators lining the streets to...
Events History and Commemoration RSL NSW in the media
Related Stories
Latest News

We caught up with Troy Knight about his service, transitioning out of the Air Force twice and how...
Drug and alcohol Mental health transition from ADF veteran health and wellbeing veteran stories