We caught up with Kingscliff RSL sub-Branch President Russell Maddalena, who served in Rwanda, East Timor, Iraq and Afghanistan, to find out what he wishes he’d known before transitioning out of the Army and the advice he’d give those still serving.

I don’t think I really understood it at the time, but looking back, I joined the ADF out of a desire to serve. I’d already joined the State Emergency Services and Air Sea Rescue at age 14, and Defence seemed like a shining light at the end of school – an opportunity to serve, learn and improve.

I started at ADFA in 1988 studying civil engineering. But I struggled! It was ridiculously tough – my schooling and life experience had not prepared me for it – with around 38 contact hours a week for study plus 15 to 20 military hours and all the other demands that came with it. However, I was really drawn to the military side, and the Army must have seen some potential in me because I was selected for direct entry into Royal Military College (RMC).

After my experience at ADFA, I got through RMC relatively comfortably. I’d been through all the rituals already. I knew what to expect – how to iron my clothes and wear the uniform, and the importance of being part of the team. 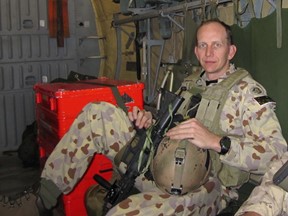 Russell worked in 26 countries and deployed 21 times in 30 years.

In some ways, not succeeding on my first try at the civil engineering degree worked out for the best for my future career. I still commissioned into the Royal Australian Engineers as a combat engineer officer and was able to specialise in bomb search and disposal; chemical, biological, radiological and nuclear defence; and diving – skills that I would have been unlikely to have as a civil engineer.  These specialist skills provided some incredible opportunities for the future.

And I did end up coming back to study, completing a Bachelor of Professional Studies in Emergency Management part time by finishing assignments late at night under camouflage netting out on training and submitting my last assignment from Timor. Later I would complete a Masters in Management and another in Strategic Studies.

Rwanda was pretty confronting for a young bloke who’d never been overseas but it came with valuable leadership opportunities and was an experience that set me up for future challenges. As well as maintaining the UN Hospital and camp, performing bomb disposal twice a week around Kigali and dealing with the explosive remnant of war, we were able to support orphanages by building furniture, putting in windows and making crutches for injured kids. There was a whole humanitarian aspect to our service there.

I then rolled through a number of homeland security operations including the Sydney 2000 Olympics and Commonwealth Heads of Government Meeting post-September 11.

East Timor was next, where we provided combat engineer support to security operations on the border, maintained camp infrastructure for the Australian troops and supported the locals by improving the road infrastructure so they could get their goods to market.

“Germany was supposed to be a bit of a holding pattern until the next opportunity. But when I got back in May 2017 … there was no real plan for my future.”

Then came Iraq and Afghanistan. In 2006 I helped establish the Australian Joint Counter Improvised Explosive Device (IED) Task Force and then became the first Australian embedded officer with the Joint IED Defeat Organisation in Washington DC.  For the next seven years my positions in the US and Australia were focused on supporting the war: CIED, Commanding Officer of the Incident Response Regiment where I had about a quarter of the regiment deploy to Afghanistan at any one time, Plans Team Lead at HQ ISAF Joint Command, and as the Director Operational Plans at HQ Joint Operations Command where I was responsible for planning the ADF contribution in the Middle East.

During this period I did 11 deployments into Afghanistan and four into Iraq – mostly for four to six weeks at a time – after which we would fly home and go into work the next day. After one trip, I’d just flown back and was having a couple of hours sleep after travelling for 20 hours when my three-year-old daughter came in with my phone – I had to be in the office for a meeting with CJOPs in an hour.

That pace became normalised for me over that period but when I reflect now on the demands it put on my family I can’t believe what I asked and expected of them. My wife is an extremely resilient, strong woman and I am so grateful for her unwavering support over that extended period.

My last position was a posting to Germany as the Defence Attaché at the Australian Embassy in Berlin. When the opportunity came up (with only 12 hours consideration time), I was aware of the risk it could put me out of sight and out of mind for a couple of years, but the alternative positions being offered at the time were not compelling.

As a professional experience for me and a life experience for my family, it was fantastic and we’d do it again in a heartbeat. I was working as a Defence diplomat with incredibly professional DFAT staff on interesting issues and challenges at that time in Europe, and my kids got to visit 12 European countries. During that period, Germany was bidding on two of Australia’s major Defence acquisitions, which kept us busy with senior leadership and ministerial visits.

“I went into the transition centre as a Colonel and came out as Mr Maddalena. It was a tough day … The transition process was underwhelming and the complete lack of senior leadership engagement during that period was truly disappointing.”

I hadn’t thought about it as a ‘transition job’ because I wasn’t thinking about transitioning. Germany was supposed to be a bit of a holding pattern until the next opportunity. But when I got back in May 2017, a lot of the senior leadership positions had changed and there was no real plan for my future. Promises that had been made and opportunities that had been discussed were no longer on the table. There was only one job on offer at the time and it wasn’t a good fit.

So I made a fairly hasty decision to transition out of Defence. On my last day in uniform in September 2017 I went into the transition centre as a Colonel and came out as Mr Maddalena. It was a tough day – I’d committed 30 years to Defence, done 24 different jobs, deployed 21 times, worked in 26 countries, had incredible opportunities and worked with lots of wonderful people but didn’t really know anything else.

The transition process was underwhelming and the complete lack of senior leadership engagement during that period was truly disappointing – not a single call or email.

What I wish I’d known

I wasn’t prepared in any way for my Defence career to be over. Having been through that, my advice is to start planning early and keep your options open because when it happens it can happen very quickly. I was so intent on the job I had, I hadn’t taken the time to think about what might come next.

It’s important to consider what’s best for you, not just what’s best for the organisation, and to balance the competing demands. I always focused on what was best for the Army, including with my studies, instead of looking at options that might have prepared me better for the future. Defence careers are extremely busy but if you can find the time to look up and out, it’s worth it. Do the TAFE course or uni course that interests you – it could be your future if you’re injured or decide to move on. Everyone will transition at some stage.

“Finding a new community is also really critical to a successful transition. It’s important to be with community-minded people with a similar drive.”

Develop your network outside of Defence. I know it is not as easy for younger veterans but for me it was critical in getting my second career going. Just when I started looking in earnest for my next job I received a call from a retired Sapper Officer offering me a contract with QinetiQ Australia – it was a great opportunity and good timing, not so much good management on my part!

During that contract I was offered a full-time position and remain with QinetiQ today – I was very lucky to find a veteran-friendly company with industry-leading flexible work policies, which was prepared to invest in me to transition my military experience into the business world.

I had a good experience with the RSL when posted to Mt Isa back in 1998 so I was aware of the work it does for the veteran community. When we moved to Kingscliff, I went to a few meetings and joined up because it felt like the right thing to do. At the annual general meeting, I walked out as sub-Branch President which I hadn’t expected but I guess I went into that ambush with eyes wide open!

It’s an opportunity for me to continue to serve in a way. I’m not there because I need support but because I have the ability to support. Some vets think they don’t need the RSL because they’re fine. But not everyone is fine or stays fine. And it doesn’t take much time or effort to have a chat with a fellow veteran who might benefit from the company and conversation, and to help deliver local commemoration services.

Finding a new community is also really critical to a successful transition. It’s important to be with community-minded people with a similar drive. The RSL provides a network of people with shared life experience, but I also joined the local Surf Lifesaving Club here and I know other veterans who’ve joined the State Emergency Services or local clubs and rural fire brigades – it helps scratch that itch to serve and is a great way to broaden your network. Whether it’s a club or a gym or sports team, making those connections really matters.

Russell Maddalena is part of the RSL NSW Young Veterans Committee, which advises the RSL NSW Board on matters impacting young veterans and their families. Find out more about the YVC.