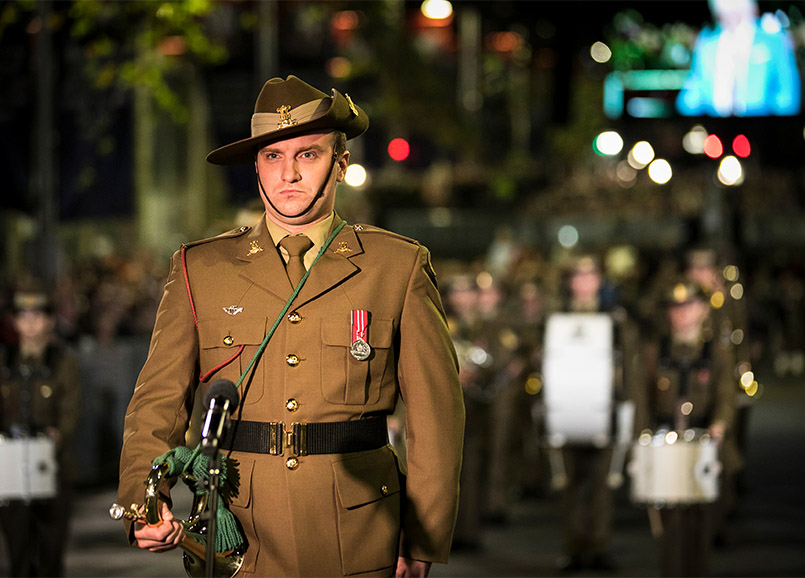 The date of the landing at ANZAC Cove, 25 April, was chosen to be the day that would become our national day of commemoration.

Initially, ANZAC Day was a mark of respect for those who served and sacrificed their lives in the Great War. However, in the years since WWI, Australian troops have answered the call in conflicts across the globe, and the date has become the day on which the nation remembers those who served and those who made the ultimate sacrifice in all the conflicts that Australia has participated in.

ANZAC, originally an acronym for the Australian and New Zealand Army Corps, that was used by the clerks of General Birdwood’s staff at his headquarters in Shepheard’s Hotel in Cairo, Egypt.

The word ANZAC was approved by General Birdwood as the code for the Corps, when the word was proposed by a Major CM Wagstaff. It is thought the suggestion came from a Lieutenant AT White of the Royal Army Service Corps. It is recorded in the official history that “it was some time before the code word came into general use, and at the Landing (on 25 April 1915) many men in the divisions had not heard of it”. After the landing, General Birdwood gained permission to use the name for the area occupied by the Australian and New Zealand Forces.

The History of ANZAC Day

At ANZAC Cove on the Dardanelles Peninsula, Australian and New Zealand troops landed on 25 April 1915 where they, along with other Commonwealth Forces, held ground against almost impossible odds for the next eight months, against a Turkish force determined to defend to the death their homeland.

The British action planned to secure the heights overlooking the forts guarding the narrow straits at the entrance to the Sea of Marmora. The purpose to silence them and allow the French and British Navy to proceed to Constantinople (now Istanbul) and by a show of force convince the Turkish Government to capitulate and to come to the side of the Allies.

The plans did not bear fruit and what ensued was a tremendous series of battles by both sides over the next eight months. Both sides suffered horrendous casualties amongst the many ravines and gullies of that rugged battleground on which the ANZAC tradition was formed and that has become the benchmark for standards of courage, mateship and determination that has set an example for all Australians to follow.

The Price of Liberty is Eternal Vigilance
Lest We Forget

Why We Commemorate ANZAC Day

ANZAC Day is a day of remembrance. At dawn on 25 April 1915 a contingent of Australian and New Zealand Soldiers landed on Turkey’s Gallipoli Peninsula. It was with this landing that there began to emerge the tradition of ANZAC with the ideals of mateship and sacrifice that distinguish and unite all Australians irrespective of their origins.

ANZAC Day, 25 April, is the day Australia commemorates with services and marches in cities and towns and throughout the world where servicemen, servicewomen and peacekeepers are stationed, to remember all those who lost their lives in service to their country, in all wars.

We Will Remember Them
Lest We Forget