Life lessons thanks to the Invictus Games

Year five students from York Public School will have the opportunity to travel to the Invictus Games 2018 thanks to the City of Penrith RSL sub-Branch.

The school has received a $3000 donation to go towards their tickets and transport.

“The RSL NSW is heavily involved in the Invictus Games and seeing as York Public School is in our area we thought that it would be fitting to help them out, so they can all go to the games and watch the events to see how these disabled veterans cope,” Mr McConnell said. 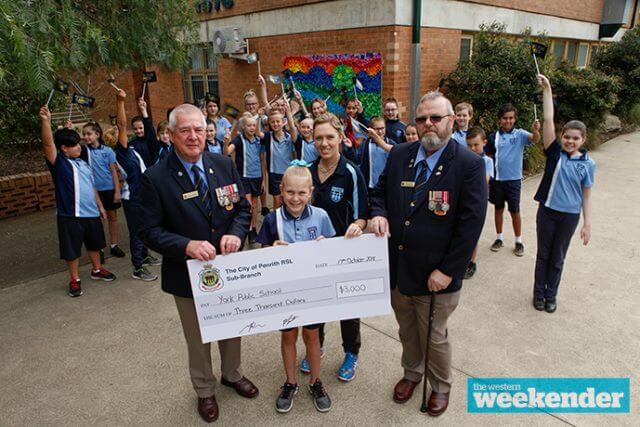 “We want to encourage the children to be accepting, to try and help these people and just to understand that they do have these certain disabilities and it’s not their fault.”

Ms Linford said the experience is about opening the children’s eyes up to see what’s happening in the world and not just what’s in front of them on a screen.

“I created the adaptive sports modules which involve a variety of activities for example netball, but you have to use your non-dominant arm or doing an obstacle course blindfolded where the children must listen carefully to instructions from their teammates.

“We go to work and we come home but for these people they go to work, they’ve been injured, and their lives are then impacted forever and for my class they are really learning what it means to be resilient.”

As part of the Invictus Games teaching program, students spent a whole day using their non-writing hand and only one arm to do everything from sport to opening their lunch boxes.

“I’m excited that I get to see the athletes compete and try their best,” she said.

The Invictus Games Sydney 2018 will be held at Sydney Olympic Park from Saturday, October 20-27.

York Public School thanked the City of Penrith RSL Sub-Branch for their support and said without them they wouldn’t have been able to be part of the experience.

This article first appeared in The Western Weekender

On the road with Jon Black, CEO RSL NSW

Russell Maddalena shares his experience of a life in Defence and the advice he’d like to give...
transition from ADF Transition from service veteran stories
Latest News