Marking the end of World War I hostilities, Remembrance Day offers a chance to remember the service and sacrifice of veterans past and present. This year, 104 years after the armistice, a group of 30 RSL NSW members was invited to attend the Remembrance Day service at the Cenotaph in Martin Place with RSL NSW President Ray James OAM and various special guests. A wide community of RSL NSW members of all ages, alongside their families and interested members of the public, were also in the audience, bringing Martin Place almost to capacity. Six members who attended with Mr James told us what Remembrance Day means to them, which part of this year’s service resonated most, and how the service has changed over the years.

James Weaver is a member of the Armidale RSL sub-Branch. He comes from a family of Defence personnel – his father, mother, grandfather and uncles all served.

The service was especially poignant for me this year because my dad passed away in February. He was 99 and a half, and had survived World War II, Korea and Vietnam. It was also good to meet with RSL NSW President Ray James and the ANZAC House team before the service at the Royal Australian Regiment Memorial.

Had you been to a previous Remembrance Day service in Sydney?

I hadn’t. I still serve in Reserve, so I usually go to services at bases. There are commemorations right across the country. In Tamworth, the hall is decked out and all of the community comes together. But it’s nice to get involved in a service in a major city.

LTCOL Robyn White is currently serving in the Australian Army.

It’s been an honour and a delight to be invited by RSL NSW to attend this year’s service. I always find the day of great personal and national significance. I’m still a serving member, so I’m always reflecting on my service and the service of others. It’s important that we remember and honour the servicemen and women who have come before us.

In his reflection, Rear Admiral Jonathan Earley CSC RAN talked about the significance of the uniform. It’s more than just a uniform – there’s so much more to what we do as serving members and veterans. 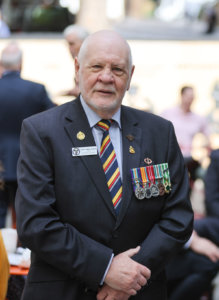 Terry James is a member of the Hornsby RSL sub-Branch, where he was previously the President.

I thought Rear Admiral Earley made a great speech. He put it well when he said “Lest we forget” – we should never do that. Coming in on the train, I was worried people wouldn’t be interested. But when I arrived, I was completely at ease.

What are you thinking about during the minute’s silence?

Friends I lost. I served a year in Vietnam in 1969 in 5th Battalion, Royal Australian Regiment. I lost many friends, including one friend two weeks ago to prostate cancer. That’s what you think about, especially during the ‘Ode’ and the ‘Last Post’. As you get older, it gets to you more and more. 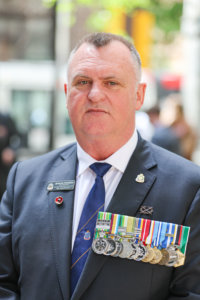 Shaun Parren is a member of the Balgowlah Seaforth Clontarf RSL sub-Branch. He was in the British Merchant Navy for seven years and the Australian Army for 22 years.

Connecting with other veterans is so important. You get to speak with people you’ve never met in your life, but you have the same background. It’s a welcoming environment with a lot of camaraderie.

RSL NSW member John Napier spent a decade in the Navy and served in Vietnam.

It’s always heartwarming to share memories and meet other veterans. I never have any problem walking up to somebody and starting a conversation. For the rest of the day, I had the biggest smile on my face.

How have Remembrance Day services changed over the years?

Remembrance Day used to be more ceremonial, all spit and polish with a lot of boot stomping and soldiers doing their thing in front of the veterans. Now, it’s become much more relaxed and veteran-oriented – an opportunity to sit and contemplate the people you lost. 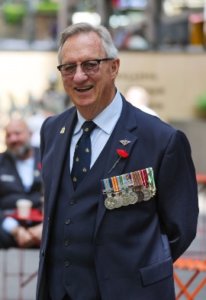 Peter Watson is the former President of Mosman RSL sub-Branch. He is a Navy veteran and chair of the Bradley Head Naval Memorial.

The service was appropriately dignified. The attendance said it all, from the Governor down. Hearing the school children read ‘In Flanders Fields’ was very poignant – the more children we get involved in these services, the better.

RSL NSW State Congress and AGM was attended by more than 240 delegates, discussing the future of the...
Events RSL NSW Strategic Plan