Invictus Games Sydney 2018 competitors will take home a unique Australian memento from the Games thanks to the RSL Auxiliaries. 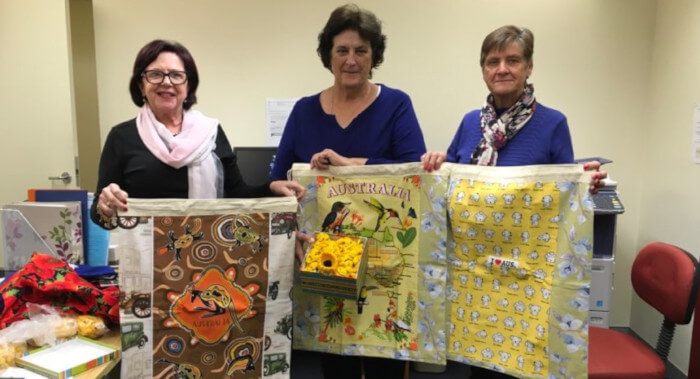 Gifts have been hand-crafted all around the country including more than 550 laundry bags for the competitors, a quilt for each of the 18 competing nations and more than 1,250 black and yellow poppies for family members to wear as a symbol of their support for the competitors.

Quilts have also been prepared for several high-profile guests, including the Duke and Duchess of Sussex.

These gifts show the support of RSL NSW for those competing and the family and friends that support them. The quilts and laundry bags are Australian themed, including Indigenous material sourced from the Northern Territory for the laundry bags as well as scenes on the quilts representing iconic Australian sites such as the Great Barrier Reef and Sydney Harbour Bridge.

Central Council of RSL Auxiliaries state president Pauline James said, “RSL Auxiliaries were founded on fellowship and a desire to care for our communities. We are a voluntary organisation, dedicated to supporting the welfare of veterans of all wars and conflicts. The gifts are our way of rallying our troops and showing support for the Invictus Games competitors and their friends and family.

RSL NSW president James Brown said he was delighted the RSL community could provide such a uniquely Australian gift for the competitors and their family and friends.

“The RSL Auxiliaries are a passionate group of supporters who work tirelessly to help our veterans. We hope the competitors and their family and friends will treasure their gifts, which have been created with care and dedication around Australia,” said Mr Brown.

With under 10 days to go until the start of the Games, and 80 per cent of tickets already sold, the public are being urged to get in quick so they don’t miss out.

The Invictus Games is an international adaptive sporting event for wounded, injured and ill servicemen and women, both active duty and veteran. The Games use the healing power of sport to inspire recovery, support rehabilitation and celebrate the crucial role played by family and friends.

Invictus Games Sydney 2018 will take place from 20-27 October and will host more than 500 competitors from across 18 nations competing in 11 medal sports. The events will be staged across greater Sydney, including Sydney Olympic Park and in and around Sydney Harbour. An estimated 1,000 family and friends are expected to accompany the competitors with all being supported by around 1,000 volunteers.

This article originally appeared in defenceconnect.com.au

The Returned & Services League of Australia is closely monitoring moves for the return of honours...
Latest News