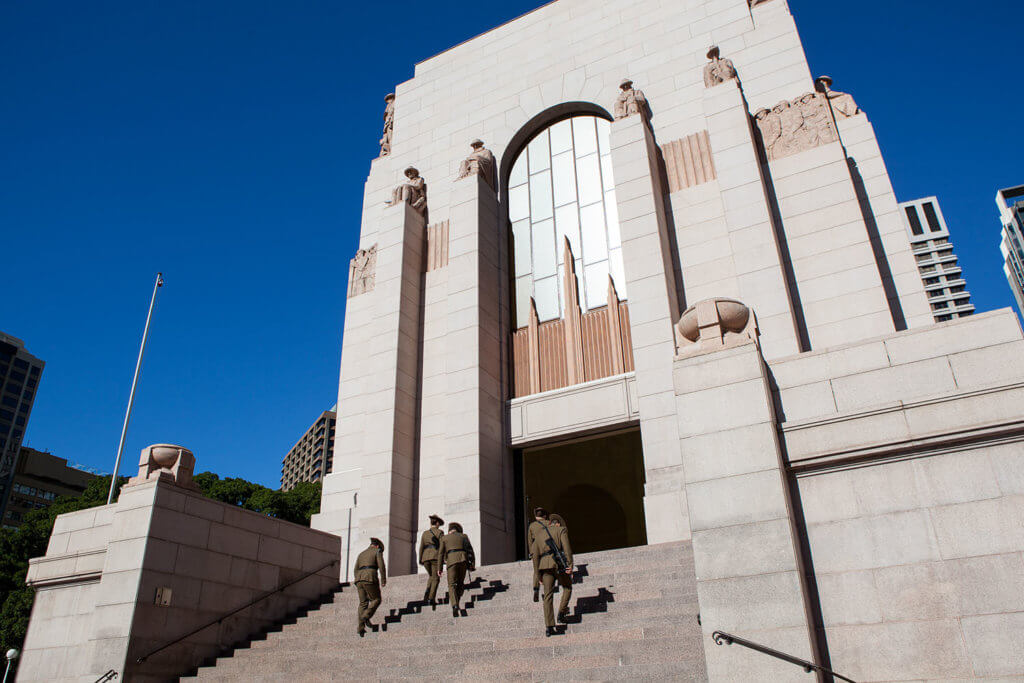 Located in Hyde Park south, towards its southern boundary.  The ANZAC Memorial was erected to perpetuate the memory of the men and women from New South Wales who served in the Great War of 1914 – 1918.

A recent addition to the Memorial is a museum that can be accessed from the Western door. In the museum you can see displays of uniforms from all theatres of conflict, videos, paintings, trench art, models, and correspondence from those who served.

Situated towards the southern end of Hyde Park and centred upon the main avenue, the Memorial is 100 feet high. Its base measures 150 feet by 90 feet. On its main approach is the “Lake of Reflections” bordered by poplar trees in memory of the battle of France.

It is constructed from reinforced concrete. The exterior is finished with New South Wales red granite. The interior is finished with New South Wales white marble and comprises a circular “Hall of Silence”. A great “Hall of Memory” towers above, domed with stairs. A bronze group of sculptures, symbolising Sacrifice, gaze down from the terrace level.

How the Memorial Came To Be

The first practical effort to erect a permanent memorial in New South Wales came on the first anniversary of the landing at ANZAC Cove on 25 April 1915. The intention was to memorialise those that participated in the landing, and also members of the A.I.F. who lost their lives in the Great War.

A fund was opened on the Day of Remembrance. It received a positive response and the end of the War it had grown to $120,000. However, it wasn’t until years later that the project began.

The site and the design of the Memorial caused argument, delaying construction.

The Institute of Architects recommended to the Government that the Memorial should be built in Hyde Park but it was not until 1928 that this began.

The first prize was won by Mr C. Bruce Dellit. Second and third were awarded to Mr John D. Moore Mr Peter A. Kaad, respectively. All were from Sydney, although no fewer than 117 designs were received from all over the world.

In November 1931, tenders were called for the erection of the Memorial. The contract was awarded to Messrs. Kell & Rigby. Work began shortly after.

By May 1932, the Memorial began to take shape. Mr Rayner Hoff who had been entrusted with the sculpture, had his cast approved by the Trustees.

His Royal Highness, the Duke of Gloucester, opened and dedicated the Memorial on 24 November 1934 at a ceremony witnessed by approximately 100,000 people.

Today, the Memorial is complete and will stand through the ages as a tribute to the memory of those who made the last great sacrifice that truth and liberty should not perish from the Earth.

You can find out more about the history of the ANZAC Memorial, including The Centenary Project by visiting the official ANZAC Memorial website.

Next: Read About The Cenotaph in Martin Place