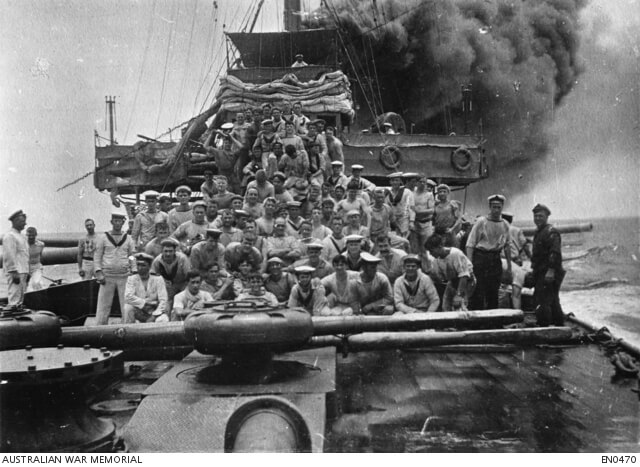 There was no single definitive factor that caused the start of the First World War. Tensions throughout Europe had been growing for many years – nationalism, an arms race, disputes over territories and spheres of influence, greed, fear, distrust, and the division of Europe into two hostile alliances were all contributing factors.

When Britain declared war on Germany on 4 August 1914, most Australians greeted the news with great enthusiasm. Volunteers rushed to enlist for an exciting war which was expected to be over by Christmas.

For Australia, as for many nations, the First World War remains the most costly conflict in terms of deaths and casualties. From a population of fewer than five million, 416,809 men enlisted, of which over 60,000 were killed and 156,000 wounded, gassed, or taken prisoner. Australia’s early involvement in the War included the Australian Naval and Military Expeditionary Force taking possession of German New Guinea and the neighbouring islands of the Bismarck Archipelago in October 1914.

Most of the men accepted into the army in August 1914 were sent first to Egypt, not Europe, to meet the threat Turkey posed to British interests in the Middle East and the Suez Canal. After four and a half months of training near Cairo, the Australian and New Zealand Army Corps (ANZAC) departed by ship for the Gallipoli peninsula. The ANZACs landed at what became known as ANZAC Cove on 25 April 1915 and established a tenuous foothold on the steep slopes above the beach.

During the early days of the campaign, the allies tried to break through Turkish lines, while the Turks tried to drive the allied troops off the peninsula. Attempts on both sides ended in failure and the ensuing stalemate continued for the remainder of 1915. The most successful operation of the campaign was the evacuation of troops on 19 and 20 December, under cover of a comprehensive deception operation. As a result, the Turks were unable to inflict more than a few casualties on the retreating forces.

Mustafa Kemal Atatürk, revered in Turkey as the saviour of the Battle of Gallipoli and as the father of the country that he helped form after the war, wrote in 1934 a tribute to the ANZACs:

“Those heroes who shed their blood and lost their lives… you are now lying in the soil of a friendly country. Therefore, rest in peace. There is no difference between the Johnnies and the Mehmets to us where they lie side by side here in this country of ours. You, the mothers who sent their sons from far away countries, wipe away your tears. Your sons are now lying in our bosom and are in peace. After having lost their lives on this land, they have become our sons as well.”

Find Out More About Why We Commemorate ANZAC Day

Following Gallipoli, Australian forces fought campaigns on the Western Front and in the Middle East. When the AIF divisions arrived in France, the war on the Western Front had long settled into a stalemate, with the opposing armies facing each other from trench systems that extended across Belgium and north-east France, from the English Channel to the Swiss border. The development of machine-guns and artillery favoured defence over attack and compounded the impasse, which lasted until the final months of the war.

While the overall hostile stalemate continued throughout 1916 and 1917, the Australians and other allied armies repeatedly attacked, preceded by massive artillery bombardments intended to cut barbed wire and destroy enemy defences. After these bombardments, waves of attacking infantry emerged from the trenches into no man’s land and advanced towards enemy positions.

The surviving Germans, protected by deep and heavily reinforced bunkers, were usually able to repel the attackers with machine-gun fire and artillery support from the rear. These attacks often resulted in limited territorial gains followed, in turn, by German counterattacks. Both sides sustained heavy losses.

In July 1916 Australian infantry were introduced to this type of combat at Fromelles, where they suffered 5,533 casualties in 24 hours. By the end of the year about 40,000 Australians had been killed or wounded on the Western Front. In 1917 a further 76,836 Australians became casualties in battles, including Bullecourt, Messines, and the four-month campaign around Ypres, known as the Battle of Passchendaele.

In March 1918 the German army launched its final offensive of the war, hoping for a decisive victory before the military and industrial strength of the United States could be fully mobilised in support of the allies. The Germans initially met with great success, advancing 64 kilometres past the region of the 1916 Somme battles, before the offensive lost momentum.

Between April and November, the stalemate of the preceding years began to give way, as the allies combined infantry, artillery, tanks, and aircraft gained territory, effectively demonstrated in the Australian capture of Hamel  on 4 July 1918.

The allied offensive, beginning on 8 August at Amiens, also contributed to Australian successes at Mont St Quentin and Péronne and to the capture of the Hindenburg Line. In early October the Australian divisions withdrew from the front for rest and refitting; they were preparing to return when Germany surrendered on 11 November.

Unlike their counterparts in France and Belgium, the Australians in the Middle East fought a mobile war against the Ottoman Empire in conditions completely different from the mud and stagnation of the Western Front. The light horsemen and their mounts had to survive extreme heat, harsh terrain, and water shortages.

Nevertheless, casualties were comparatively light, with 1,394 Australians killed or wounded in three years of war. This campaign began in 1916 with Australian troops participating in the defence of the Suez Canal and the allied reconquest of the Sinai peninsula. In the following year Australian and other allied troops advanced into Palestine and captured Gaza and Jerusalem; by 1918 they had occupied Lebanon and Syria. On 30 October 1918 Turkey sued for peace.

A Small Donation Can Help Veterans And Their Families

Donate In Memory Of Their Sacrifice

Australians also served at sea and in the newly formed flying corps. The Royal Australian Navy (RAN), under the command of the Royal Navy, made a significant contribution early in the war, when HMAS Sydney destroyed the German raider Emden near the Cocos Islands in November 1914.

The First World War was the first armed conflict in which aircraft were used. About 3,000 Australian airmen served in the Middle East and France with the Australian Flying Corps, mainly in observation capacities or providing infantry support.

One of the first airmen to be awarded the Victoria Cross was Lieutenant Frank McNamara in Palestine in March 1917. When flying over enemy lines he noticed his mate, Captain Rutherford, had been brought down with his plane and was about to be captured by the Turks. McNamara, himself wounded, landed and picked up Rutherford, only to overturn in a gully. The pair set fire to the plane to prevent it falling into Turkish hands before returning to Rutherford’s plane, which McNamara managed to start and make good their escape. Despite being weak from loss of blood, McNamara guided the plane back to base. He was subsequently awarded with the Victoria Cross.

Australian women volunteered for service in auxiliary roles, as cooks, nurses, drivers, interpreters, munitions workers, and skilled farm workers. While the government welcomed the service of nurses, it generally rejected offers from women in other professions to serve overseas. Australian nurses served in Egypt, France, Greece, and India, often in trying conditions or close to the front, where they were exposed to shelling and aerial bombardment.

The effect of the war was also felt at home. Families and communities grieved following the loss of so many men, and women increasingly assumed the physical and financial burden of caring for families. Anti-German feeling emerged with the outbreak of the war, and many Germans living in Australia were sent to internment camps. Censorship and surveillance, regarded by many as an excuse to silence political views that had no effect on the outcome of war, increased as the conflict continued. Social division also grew, reaching a climax in the bitterly contested (and unsuccessful) conscription referendums held in 1916 and 1917.

When the war ended, thousands of ex-servicemen, many disabled with physical or emotional wounds, had to be reintegrated into a society keen to consign the war to the past and resume normal life.

Next: The Second World War