How sport gave Peter Rudland a new lease on life

After a helicopter crash left him with extensive injuries, Peter Rudland wondered if he could still participate in sport. Then he found sit-skiing and recumbent cycling, which spurred him on to recovery.

Seven years before transitioning out of the ADF, Peter Rudland was in a terrifying Black Hawk helicopter crash in Afghanistan that claimed the lives of three Australian commandos and one American soldier.

The accident left the Platoon Sergeant with massive internal injuries and most major bones broken. His leg was impaled by his own rifle.

Peter says the most powerful influence on his recovery, outside the miracles of modern medicine, has come from sport.

“Before the crash I’d been heavily into running,” he says. “I got into running in my 30s and pretty much ran wherever I went. I then took up triathlon and was building towards an IronMan event in 2010.

“Around 2013, during my recovery, my unit sent me to Canada on a rehab trip, where I was introduced to snow sports. I’d never had anything to do with the snow and I was quite excited about it.”

“I’m quite a competitive guy anyway. That’s part of the reason I spent my career in Special Operations. I always wanted to do things bigger, harder, faster.” – Peter Rudland

As he recovered, Peter struggled to find out how someone with his level of injury could participate in sport. In Canada, however, he learned all about adaptive sports.

“It was amazing,” he says. “I really enjoyed it. I learned to sit-ski in Canada with some of the coaching staff, who were just amazing. I loved it. I felt my competitive edge coming back.”

Two years later, he attended a pre-selection camp for the Warrior Games in the US, which further opened him up to competition. At the same time, he was introduced to recumbent cycling – and fell in love with that too.

At his first Invictus Games, Peter says, he came “dead last” in every event he entered. But that didn’t matter. He was doing something he loved, meeting new people, making new friends and finding new purpose.

Plus, he was getting better at these new, adaptive sports. When he attended the Invictus Games as co-captain, Peter won gold, and all the while his recovery was accelerating thanks to his new interests.

“It was good to get that feeling back while I was doing something I really enjoyed. That’s why I embraced it so much and that’s why opportunities presented themselves to me fairly early. People saw the purpose sport gave me and they recognised my value through that sport.”

Peter, who is an RSL NSW member and an ambassador for RSL Australia, now works with Invictus Games athletes in a mentoring role in his role with the Australian Defence Force Sports Cell. Along the way he has travelled the world, met countless people and even spoken to Federal Parliament.

Peter learnt to sit-ski in Canada, an experience which reinvigorated him after his significant injury. 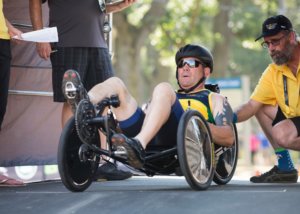 After sit-skiing came recumbent cycling, the next step in Peter’s sporting journey post-injury.

Peter competed at the Invictus Games as co-captain, winning gold with his team.

The RSL NSW Sport and Recreation Pilot offers a chance to build veteran wellbeing and community connection. Eastern Metropolitan and Lower North Coast District sub-Branches can get involved straight away – and sub-Branches across the state can find inspiration for their next event or activity. Learn more.