At 11 o’clock on 11 November 1918, fighting in the First World War – the most destructive war fought to that date – came to a formal close as Germany, the Allied Powers and the United States concluded an Armistice. Turkey and Austria-Hungary had ceased fighting some days earlier.

The mass armies and unprecedented industrialisation that were salient features of the war had led to a deadlock in Northern France and Belgium that had required four terrible years of attritional warfare and economic blockade to break.

The result was a horrendous casualty list for all the major combatants that shocked their people. Total casualties for WWI are estimated at 20 million dead and 20 million injured.

At least a further 8,000 died of war-related injuries after the war. These figures do not include the neurological trauma inflicted on so many soldiers, which negatively affected their lives and those of their families for many years afterwards. 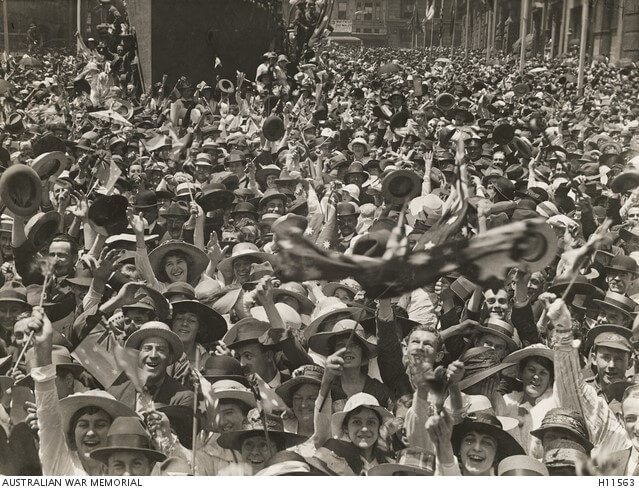 A crowd in Martin Place, central Sydney, celebrate the news of the signing of the Armistice. Photo credit AWM

In these circumstances, it is no surprise that 11 November – the day the carnage stopped – became a date of enduring significance. Armistice Day, as it was known, became the day to commemorate the sacrifice of the war.

The first commemoration was at the Cenotaph in London on the first anniversary of the end of the war, and it was on this occasion that the tradition of maintaining two minutes silence from 11am was introduced.

Although the idea of a commemorative silence was first suggested by a London-based Australian journalist, Edward Honey, the tradition originated in South Africa during the war and passed to London in 1919 where it was approved by King George V, immediately prior to the Armistice Day commemoration.

He requested that the custom be observed throughout the Empire. The length of silence has since been reduced to one minute. It is preceded by the Last Post and followed by the rousing strains of the Reveille.

Ray James, President of RSL NSW, speaks on the importance of Remembrance Day:

Throughout Australia memorials great and small were established to commemorate the sacrifice. Most cities, towns and suburbs erected monuments of some description – statues, cairns or buildings of various sizes to commemorate their local dead.

At the inspiration of Dr Charles Bean, the official historian of Australia during WWI, work began in Canberra to build a national memorial to honour the fallen and tell their story. Opened on Armistice Day 1941, the Australian War Memorial (AWM) provides a national focus for remembrance.

In 1939 Australia was again involved in a world war. The tradition of Armistice Day continued, but its name was changed to Remembrance Day as it would now honour the dead of WWII and the later Australian military involvements in Korea, Malaysia, Vietnam, Iraq, Afghanistan and the myriad peacekeeping operations throughout the world. 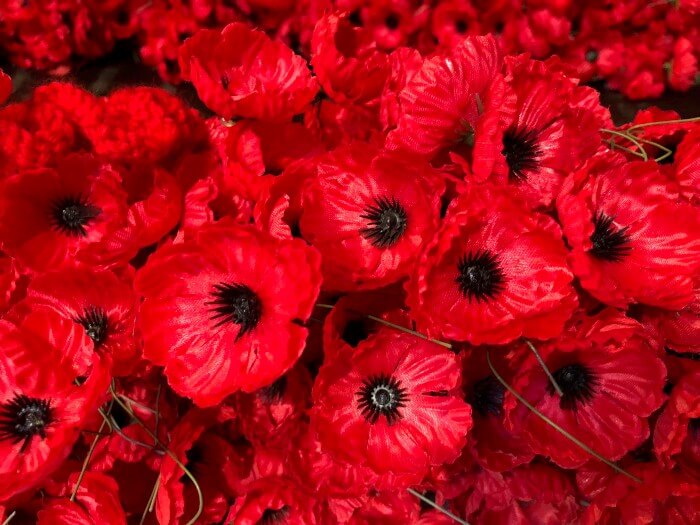 Poppies carefully placed on the Roll on Honour at the AWM. Photo credit Emi Berry

The most noticeable symbol of Remembrance Day is the red Flanders poppy. It was popularised in the contemporary poem of the Canadian medical officer Lieutenant Colonel John McCrae, who was moved to write it in 1915 after the death of a close friend. It was published in Punch magazine.

McCrae himself became a victim of the war, dying of pneumonia in 1918. The first stanza of his poem reads:

‘In Flanders fields the poppies blow
Between the crosses, row on row,
That mark our place; and in the sky
The larks, still bravely singing, fly
Scarce heard amid the guns below’

Macrae’s poem inspired American Professor Moina Michael, who declared she would always wear a red poppy as a symbol of remembrance for those who served in the war. Involved in teaching disabled ex-servicemen, she thought of selling silk red poppies to raise money to support the men.

Adoption of The Poppy

The idea was adopted by American and British ex-servicemen’s organisations and within three years, had spread across the Empire and Europe. For practical reasons red paper poppies were adopted.

The forerunner of the RSL, the Returned Soldiers and Sailors Imperial League, first sold poppies on Armistice Day, 1921. Priced at a shilling (10 cents) each, the funds raised were mostly used to support French children and the League’s welfare work.

One penny went to the League’s treasury. Poppies are still exchanged for a donation to support the RSL’s work with veterans, just as envisaged by Professor Michael one hundred years ago.

Since then the use of the poppy has expanded. In addition to Remembrance Day, it features in Anzac Day ceremonies.

In the United Kingdom thousands of poppies are dropped from a WWII Lancaster bomber on ceremonial occasions. In 2014, over 800,000 ceramic poppies cascaded from a turret in the Tower of London, each representing a Commonwealth death in WWI. 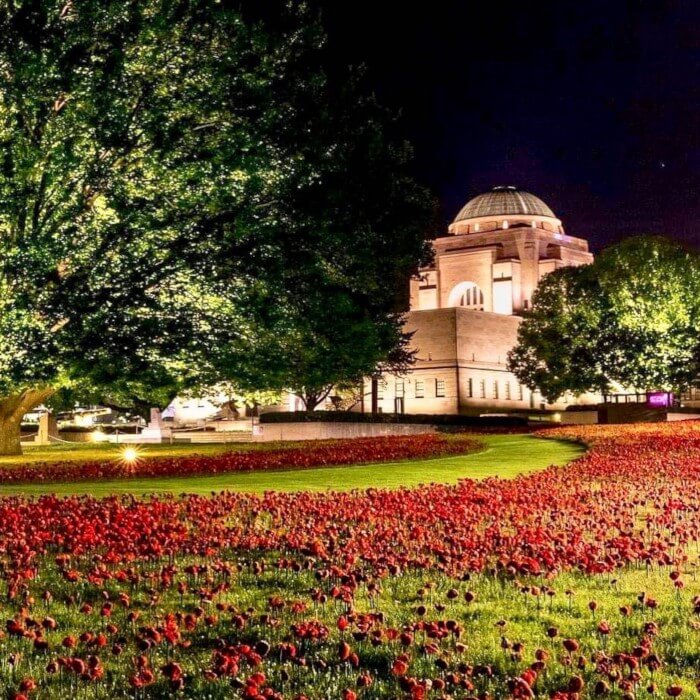 Similarly in Australia, 62,000 red poppies have been planted in the Sculpture Garden of the Australian War Memorial to commemorate the centenary of the Armistice. Handcrafted by volunteers, each represents an Australian life lost in the war.

Institutional commemoration aside, it is the personal use of the poppy that is most poignant. Splashes of red poppies stand out from the black background of the Roll of Honour in the cloisters of the Australian War Memorial, where Australians place poppies to honour one of the fallen.

It is a custom which comes from spontaneous gestures from crowds queuing to lay poppies on the Tomb of the Unknown Soldier on the day of his interment on 11 November 1993.

A century after its conception, the red poppy remains a symbol of the words voiced at each commemoration: Lest we forget

About the author: Richard Pelvin was Curator of Official Records at the Australian War Memorial and is now an independent military history researcher. Richard has had a number of books published including ‘Anzac: An Illustrated History 1914 – 1918’, ‘Vietnam’, and ‘Second World War: A Generation of Australian Heroes’.